The minute a baby arrived on the scene – a girl, oh my! – we made the conscious decision to continue exploring the world. No baby of mine could slow us down or dampen our enthusiasm for wayfaring! Ha! From the very first moment we set off to adventure with her, it was evident that our travels would be wildly different from the pre-baby days. We jetted off for the first time when our daughter was six weeks old and in her first two years alone, that passport got a serious workout. Here we are, nine years later, still seeking adventure around any and all corners. We eventually added a second – a boy, oh joy! – and five years on, I am brave enough to venture solo with both children to some pretty bucket list-worthy destinations. Once the baby years are in the rear view mirror and kids are engaging in the itinerary planning – it’s a whole new ball game. There may be fewer lingering lunches with babies sleeping under the table and perhaps a bit more time spent at the playground(s). But we have also said goodbye to our strollers and nap schedules – it’s a winning trade off, but the bitter-sweetness is not lost on me! With my little trio preparing for a “blended family” of seven coming together under one new roof, it became the impetus to embark on an adventure – just the three of us. My daughter and I visited Paris when she was only two, the start of an ongoing obsession she developed with returning to this très jolie city, so I took the leap and made some Parisian plans!

Over the years, I eventually determined that the key to a successful day of sightseeing with kids in tow is to always be one step ahead. My mantra became: mix it up and never overstay our welcome. So despite the fact that “A Day At The Louvre” was on my Paris wish list – I had to re-calibrate (‘cause let’s be real – most children would not endure this level of “torture”). We focused on restaurant lunches (lunch menus are less expensive and lunch crowds are more forgiving of misbehaving minis), I booked early and casual dinners, leaving room for spontaneity amidst the rest of the day. When the plan got derailed (as it inevitably did), hey – we’re in Paris – the attractions are plentiful. It doesn’t get much better than an impromptu picnic in a park or along the Seine. To keep our budget in check, we split our time between a simple, well located Airbnb and a neighbourhood-centric boutique hotel. The Hoxton Hotel is an elegant 18th century residence in the 2nd arrondissement. With a spectacular lobby and cool courtyard, I could easily let the kids sneak out back and play safely behind the dining area while I indulged in a petite coupe de champagne. The rooms are chic and cosy and the restaurant serves up French dishes all day long. But truthfully, our trip highlights were the parks. It became an ongoing joke that we were doing the Paris Parks Tour. By the end of the first day I realized the best planning I could do was to pick the park of the day and build our itinerary around that. And it worked like a charm. If you want to head to Paris en famille – take a page out of our book below.

First things first. Pack a picnic. We made our way to La Grande Epicerie – a true landmark for Parisian gastronomy and the ultimate place to gather your spread. It was difficult not to gobble up our tasty treats in the Uber ride to The Jardin Des Tuileries. Located behind the Louvre, this large park with epic sprawling rose gardens is the most picturesque place for a picnic. There is an amusement park in the summer months and it’s definitely a ‘Parisian moment’ at its most iconic. Take a ride on The View for the ultimate ferris wheel experience. There’s a trampoline and Merry Go Round in the far corner – blink and you’ll miss it, but it’s there year round. After you have indulged in your picnic and tired yourselves out at the park, head into the Louvre and pre-arrange for the Family Twist Treasure Hunt. It’s a fun-filled, educational, privately guided two hour discovery of the museum’s main highlights – including the Mona Lisa! – perfect for young families. Worth the splurge for the Coles-Notes art history lesson alone!

Take a seat on board a classic Citroën 2CV for a 2 hour sightseeing tour to see some of the most iconic Parisian monuments. This is a great way to experience the city without the leg work – literally! Post tour, the car dropped us at Jardin Du Luxembourg, situated between Saint-Germain-des-Prés and the Latin Quarter, these gardens are heaven for the entire family. There is an incredible fenced-in play structure (complete with a mini zipline), pony rides, an old fashioned marionette theatre and tiny toy sailboats – it’s hours of entertainment for littles. Tip for the weary traveling parent – score a patio seat at La Table Du Luxembourg and have a great lunch (and a glass of wine). If the kids still have energy left to burn, they can run around in the basketball courts while you relax and take in the gardens. Save room for an unforgettable dinner experience at La Rotisserie D’Argent. Ideally perched on the left bank of the Seine, nestled between the banks of the river and Mount Sainte-Geneviève, a stone’s throw from the Quartier Latin. Known for their bourgeois gastronomic legacy, the menu offers a surprising amount of kid-friendly options and parents will swoon over anything off the spit (hello duckling smothered in seasonal fruits). After dinner you must stroll across the bank and have ice cream at Berthillon. If you only have one crème glacée in Paris, do it here.

Hopping on a scooter and riding along the banks of the Seine was definitely a highlight for our little trio. A 2 hour scooter tour with Family Twist begins in front of Les Invalides, with its beautiful golden dome (under which lies the tomb of Napoleon – fascinating fodder for any aspiring historian). We zipped past the Pont Alexandre III, Paris’ most beautiful bridge, and by the amazing glass dome of the Grand Palais waving hello to the iconic Eiffel Tower. Our lively guide kept the kids engaged and entertained the entire time. They each received envelopes with game instructions and follow-up questions about what they saw.
And since Lunch is the new “dinner” with kids in tow (let’s face it, being a tourist is exhausting for all ages), La Fontaine De Mars had a heavenly terrace and classic bistro cuisine complete with gingham table linens and a fountain that was once a trough for the horses of Napoleon’s army. After lunch, we headed back to the Seine so the kids could play on all of the interesting structures imbedded in the walls of the bank. This was one of those perfect moments where they were delighted to be playing and I found a cafe to sip a rosé and revel in the magic of it all.

Exploring one of the oldest neighbourhoods in Paris with the kids was one of my favourite days. We had breakfast at Maison Plisson, poked our heads in a few of the gorgeous shops (let’s be real here – Paris with kids is not exactly a shopping trip) and set off to find the Place des Vosges. Often referred to as the most beautifully built square in Paris, it’s a place to take in the surrounds and chill out amidst the city’s hustle and bustle. We packed a mini soccer ball and let me tell you – it was a smart addition to our carry-on only luggage scenario. The Picasso Museum is just around the corner and was a welcome break after a few hours in the sun. It was 12 euro for me and the kids were free. We only stayed an hour and the kids loved it. You can’t go to Paris and not indulge in a crepe. It was the perfect post-gallery snack and we nailed it with the park directly across the street. The kids played for 2 hours and my son got in on a soccer game with a gang of local boys. I took a risk and ventured to a restaurant that I was dying to try. Au Petit Fer A Cheval is tiny, bustling and full of only adults. Somehow we made it work. The table was no bigger than a serving tray so we ordered one item at a time and made a game over who could get through dinner without spilling or knocking anything over. When I looked at my step counter later that evening we had surpassed 20,000 that day. I may have pushed a little hard but, in the end, we had the most memorable time together in Paris and despite the fact that it was wildly different from my past Parisian adventures, I wouldn’t change a thing.

** Family Twist – a one stop shop for unique activities in Europe offers a wide range of private, entertaining cultural and hands-on experiences for the whole family so that everyone can enjoy an exceptional, hassle-free holiday experience. Our Louvre Treasure Hunt, Seine Scooter Ride, Pastry Making Class and Vintage Car Tour were all planned by the experts on their team. 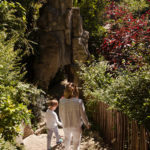 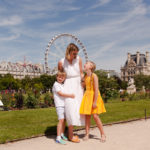 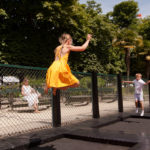 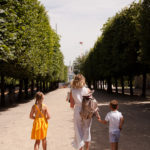 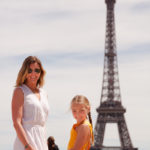 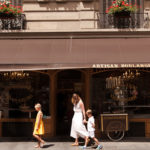 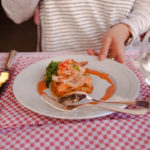 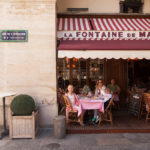 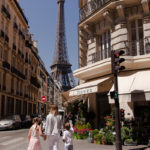 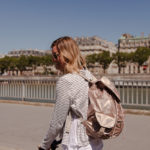 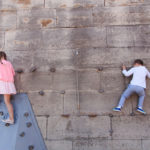 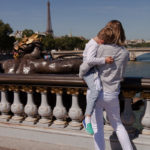 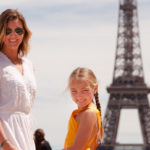